Declaring a Climate Emergency- What does it mean for third and public sector organisations?

The first Climate Emergency motion in the UK was passed in Bristol in November 2018. Since then towns, councils, organisations and businesses across the nation have followed suit including Fit for the Future members Ealing Council and Field Studies Council. But what exactly does declaring a climate emergency mean, and why might charities and other organisations decide to do it?

What does a climate emergency mean?

There is no set definition of climate emergency, and whilst the UK government declared an emergency in May of this year, this does not legally compel them to act. Many of the local areas declaring an emergency, however, have followed up with specific aims to be carbon neutral by 2030, a much more ambitious target than the UK government's, which is to reduce carbon emissions by 100% (compared to 1990 levels) by 2050.

In Scotland, a climate change emergency was declared with targets set to reduce greenhouse gas emissions to net-zero by 2045, whilst in Wales the declaration means that the government is committed to achieving a "carbon neutral public sector by 2030" and coordinating action to help other parts of the economy move away from fossil fuels.

Some councils have promised to introduce electric car hubs or build sustainable homes to achieve their goals. Network members, Ealing Council have produced a sustainability policy with key actions to move the borough toward becoming carbon neutral by 2030. There is practical help out there for council's seeking to make real change after declaring emergency: a toolkit produced by our co-founders, Ashden, supports local authorities and others in achieving ambitions as well as demonstrating how climate action delivers significant benefits rather than requiring sacrifices.

Meanwhile in the commercial sector, the ‘Business Declares Network’ is supporting businesses in declaring a climate and ecological emergency and taking purposeful action to meet science-based targets.

Why declare a climate emergency?

In many cases, climate emergencies are being declared to reflect the urgency of the situation. Some charities and other UK organisations have gone down this route in order to spread the word about the severity of the climate challenge amongst their members and supporters. On Thursday 4th July, Trustees of the Field Studies Council unanimously declared a climate emergency and set out the organisation’s ambitions to hit significant carbon reduction targets by early next year.

“As the country’s leading provider of outdoor and environmental learning we have always held the protection and conservation of the environment as one of our key values. At this critical time I believe it is incumbent on those with expert environmental knowledge to spread the word that climate change is an existential challenge. Today I am both happy and concerned to say that the Trustees have taken the unanimous decision to declare a climate emergency.”

The FSC have already saved more than £500,000 on energy bills after switching from fossil fuel derived to green energy sources. More than 50 per cent of all energy used by the FSC now comes from renewable sources such as solar and biomass. Take a look at our case study for more on FSC's achievements. 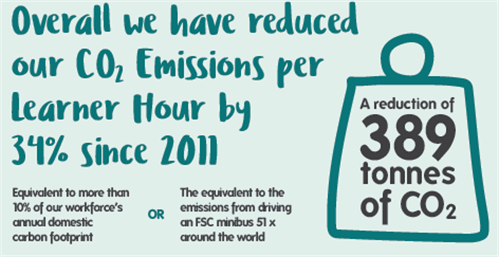 How can charities and other organisations set targets for carbon neutrality?

Regardless of whether a climate emergency is officially declared, many of our member organisations are gearing up to set net zero carbon targets. ‘Net zero’ means that any remaining emissions are balanced by absorbing an equivalent amount from the atmosphere through measures such as tree planting and reforestation.

This November 20th, Fit for the Future’s Energy Managers Meeting will hone in on this topic. The meeting is for members to discuss the data needed to set a net zero target, how to ensure the target is robust, and how to present the business case behind it. Read more about the meeting and sign up here.

Fit for the Future exists to help organisations become climate-friendly, adaptive and resilient. We do this by linking up hundreds of environmental practitioners so they can collaborate and share knowledge. Read more about what we do and find out how to join.