COP24 Poland- The Week in Brief

COP24, the United Nations Climate Change Conference, is currently underway in Katowice, Poland. Over the next two weeks, thousands of negotiators will undertake climate talks, and over 30,000 people will attend hundreds of conferences and side events. At the opening ceremony, world leaders underlined the need to act now to reach the goals of the Paris Agreement after yet another year of climate disasters. We bring you a brief look at key points from the conference so far. 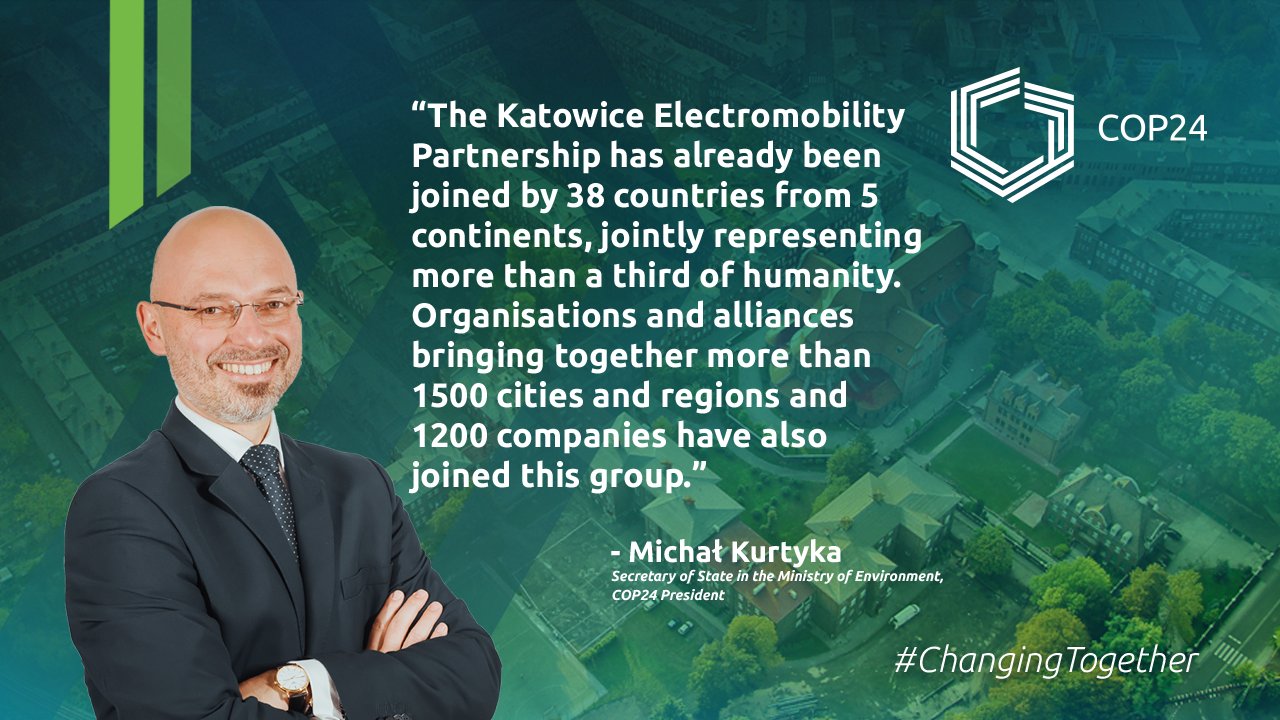 Sustainable transport has been a big focus  this year. The 'Driving Change Together' declaration- launched jointly by the Polish and UK governments- commits countries to accelerating the roll out of zero emission vehicles, boosting low-carbon public transport and improving air quality in towns and cities. More than 30 countries have signed up. Read the full story.

In other news, Polish Polar explorer Marek Kaminski spoke about his journey by electric car – 144 days, 30 000 km from Warsaw to Japan, and revealed plans for his next challenge- to travel around the world by electric car.

A World Health Organisation report launched at the conference cited health considerations are critical in the debate about climate action. The report states that the value of health gains from climate action would be approximately double the cost of mitigation policies at a global level. Full story here.

The World Bank promised to double its investment plans for low-carbon projects to £157 billion over the next five years. The investment plan aims to accelerate action against climate change and help poorer countries prepare over the coming years. Full story here.

The findings of a new report from the World Resources Institute were announced at the conference this week, with claims that the world cannot meet its climate goals and hold warming below 2°C without making big changes to the global food system. The report stresses the need to stop deforestation, produce a lot more crops, meat and milk on the same land; lower food waste and curb demand for beef and lamb. More on WRI research here.

In other news, analysis conducted by Center for Biological Diversity, Farm Forward, and Brighter Green deemed the food court menu at the conference to have an "unnecessarily high" carbon footprint. According to the research, each meat dish has a carbon footprint on average four times higher than a vegetarian alternative, with twice as many meat dishes on offer.

Next Year in New York

Plans for a big Climate Change Summit next year in New York have been announced. The Summit will focus on delivering three key outcomes: 'raising real ambition; transformative action in the real economy; and an unprecedented citizen and youth mobilization.' More here.

Well be bringing you more updates as the conference unfolds. In the meantime, you can follow the events and debates live here.

This first session on sustainable procurement will cover some of the key themes, such as policies, strategies and where to start

How will the Environment Act impact the Third Sector?

On 13th February Fit for the Future Network partnered with IEMA to deliver a webinar on the implications and impacts of the Environment Bill on charities, heritage bodies and other third sector organisations. Chief Policy Advisor for IEMA, Martin Baxter, explained the scope of the Bill, key areas of impact and involvement for third sector bodies, and next steps. The full recording is available here and you can find Martin’s presentation in our Members’ Area.

Here are some of the top takeaways: